Primosten is one of the most popular tourist resorts in Dalmatia (tourism has been developing in an organized way since the sixties) and ranks among the most picturesque small towns on the Adriatic, with a number of typical narrow streets in the old town core on a small, hilly peninsula. On the other small peninsula, north of the centre, are the hotels Slava/Zora and Raduca, while on the southern side is Hotel Marina Lucica and, farther to the south, Kremik Marina. Apart from nice beaches in the town and in the vicinity of the hotels, there is also a nudist beach on the island of Smokvica. Various sports and recreational opportunities include tennis, table tennis, bowling, beach volleyball and yachting. Yachting and diving schools are also provided. Visitors may choose between 50-odd restaurants, taverns, etc. The most famous local speciality is spiny lobster a la Primosten. The discotheque Aurora is the largest one in Dalmatia. In 30-odd villages and hamlets of Primosten Burnji, in the hinterland of Primosten, tourists are offered board and lodging. Very interesting is a large selection of home-made food: prosciutto, cheese in olive oil, lamb, roasted meat, wholesome and macrobiotic food – chickpea, olive oil, lentils, and other traditional dishes. Tasting of the famous local red wine, Babic, is a must. Babic is produced from the autochthonous wine sort in the famous vineyards of Primosten, located in the rocks. These vineyards are granted the official status of a monument to human efforts and their representation is also found in the lobby of the -United Nations building in New York. Excursions are regularly organized: Primosten Wine Trail (sightseeing tour through the villages of Primosten Burnji), visits to Krapanj (Museum of Sponge Collecting) and Zlarin (so-called “coral tours”), etc. Numerous cultural events and entertainment programs take place in the summer months, such as the Primosten fiesta and usages (the first week in August). Important religious feasts include the feast days of Our Lady of Loret (9th and 10th of May) and Our Lady of Porto (27th of July), when a big procession around the town and on the sea takes place. Primosten also features the Art Colony “Sea – People – Coast”, the Music School “Primo Primores”, the Summer Baroque Music School, the Art Gallery “Rudina”, the Ambience Gallery “Stone Spheres”. Kremik Marina has 250 berths in the sea and 140 places on the land; it also has a charter (non-schedule) fleet. PRIMOSTEN, a small town and harbour on a small peninsula between the coves of Raduca and Primosten, 30 km southeast of Sibenik; population 1,745. Economy is based on farming, growing of vines and olives, fishing and tourism. Primosten is protected from the northerly winds and has a very mild climate. The coves of Vela and Mala Raduca, Primosten and Peles feature large beaches. The town is located on the main road (M2, E65). In the 16th century a bridge was constructed so as to connect the settlement on the islet with the mainland. The islet featured also two towers and walls, pulled down at the end of the 19th century. The parish church of St. George, erected on top of the elevation in the 15th century, was thoroughly reconstructed in 1760. It keeps the icon of the Blessed Virgin Mary with silver adornments and a representation of St. Mary with Sts. Luke and George, a work by Master Cusi from 1719. The entrance into the town features a Baroque chapel from 1790. – The hamlet of Krusevo features the mediaeval church of St. Martin (tombstones on the cemetery), in Siroka is the church of St. Jerome from 1460 and in Prhovo the mediaeval church of St. George, later reconstructed. 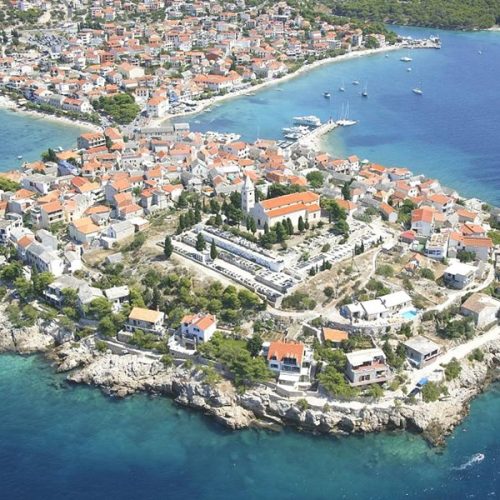 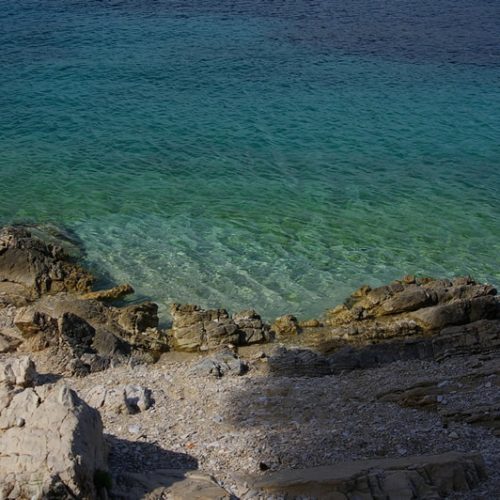 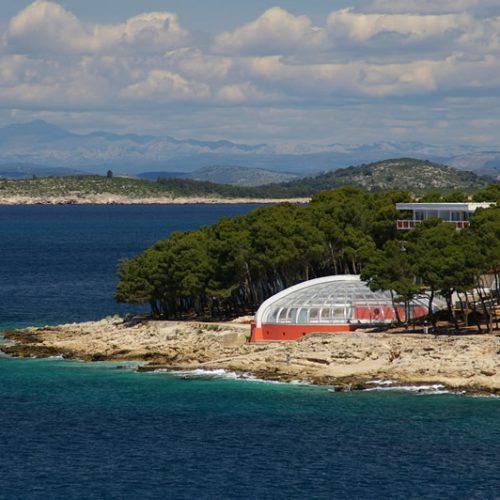 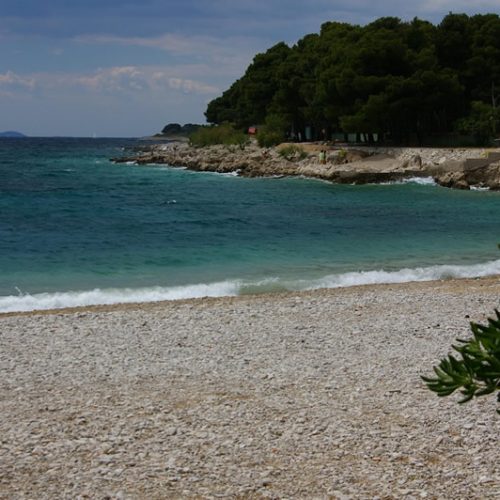 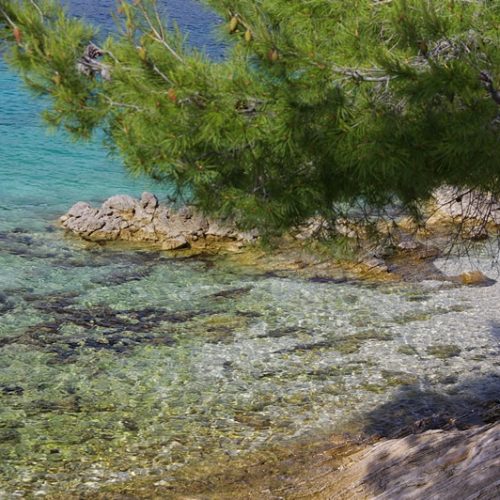 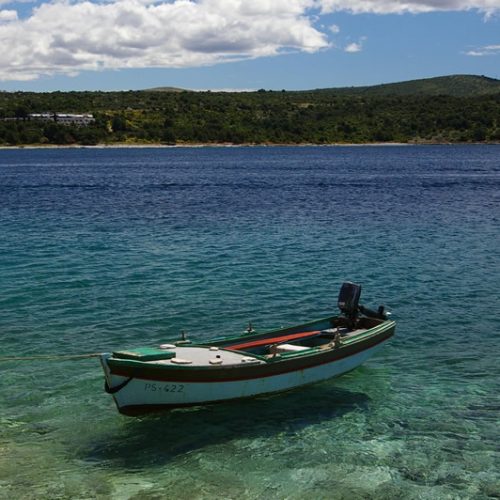 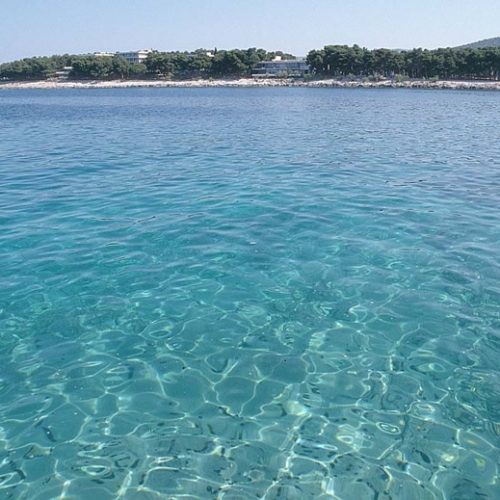 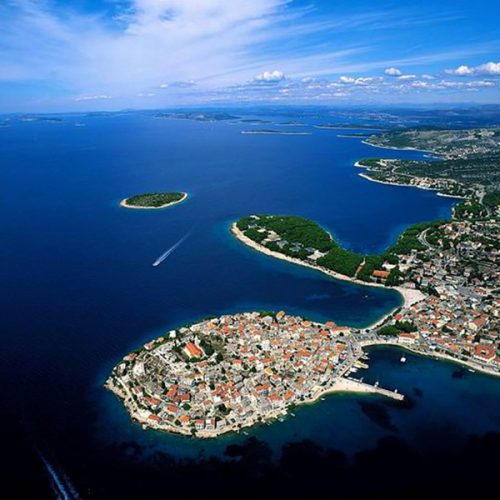 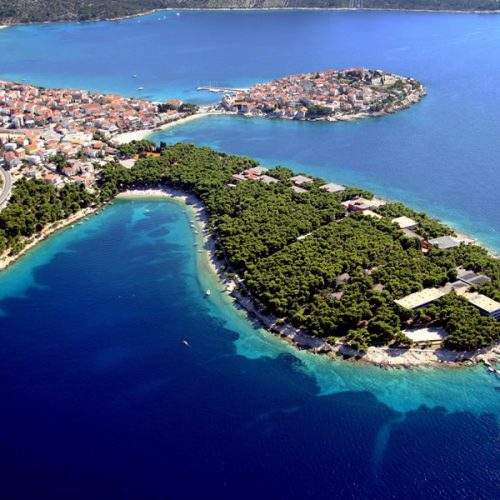 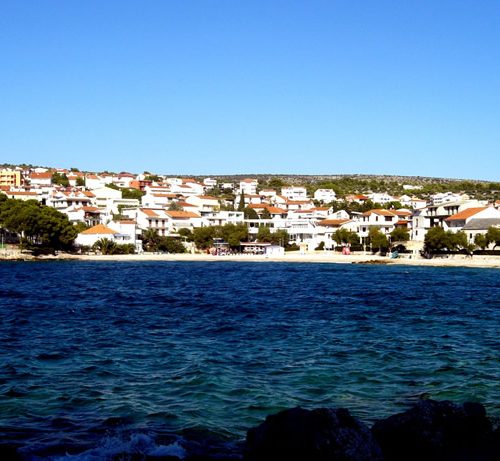 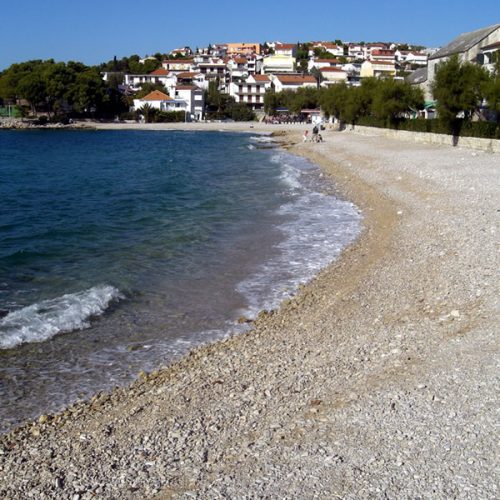 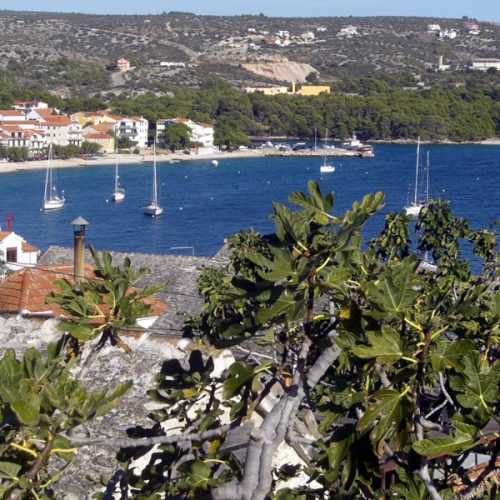 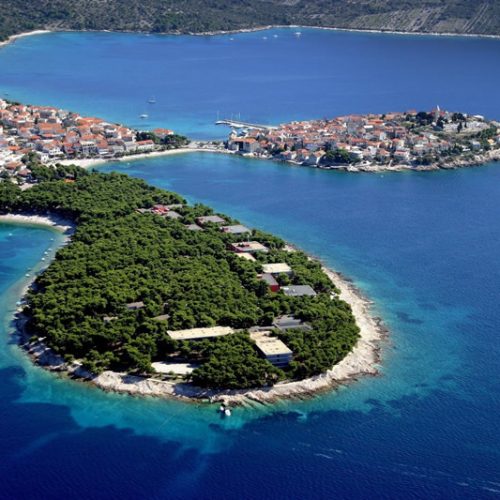 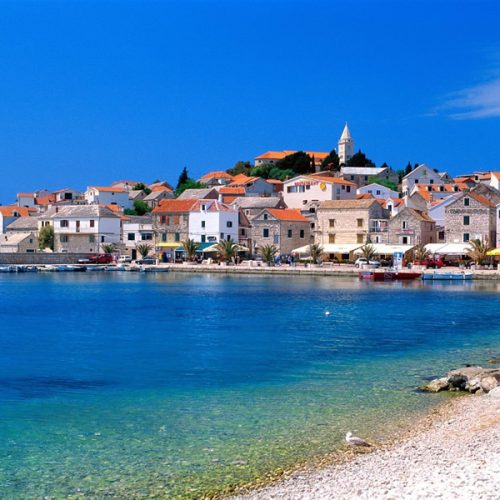 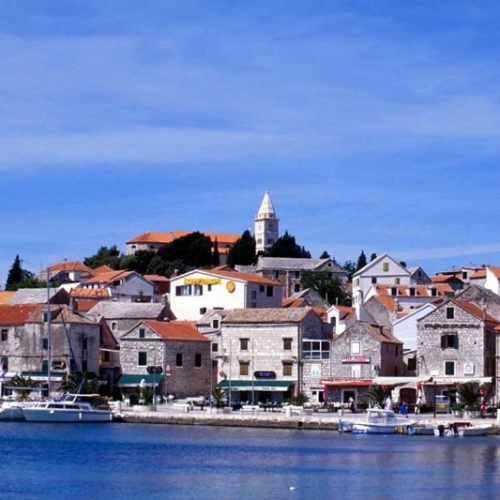 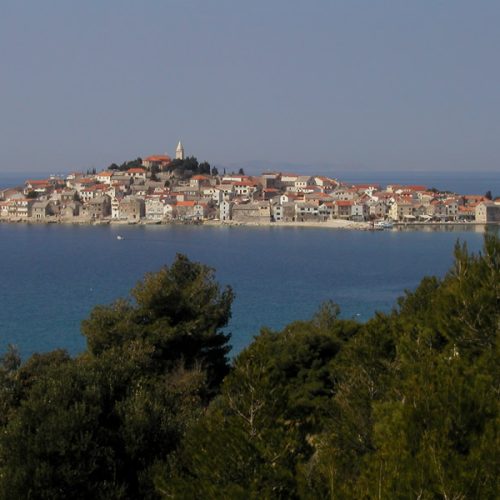 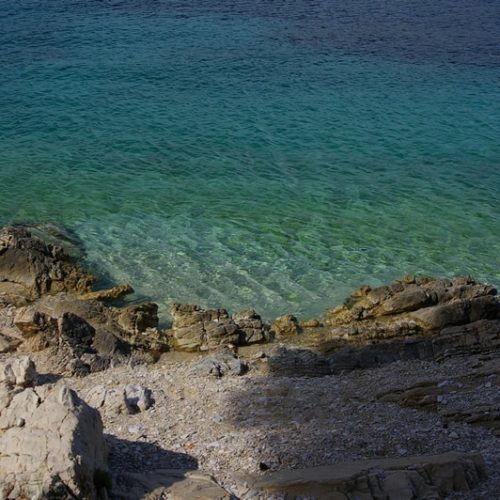 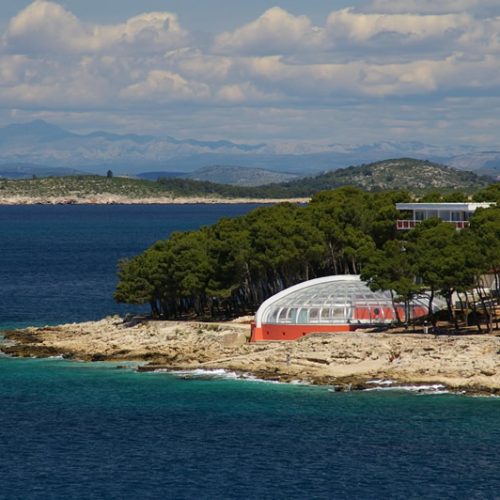 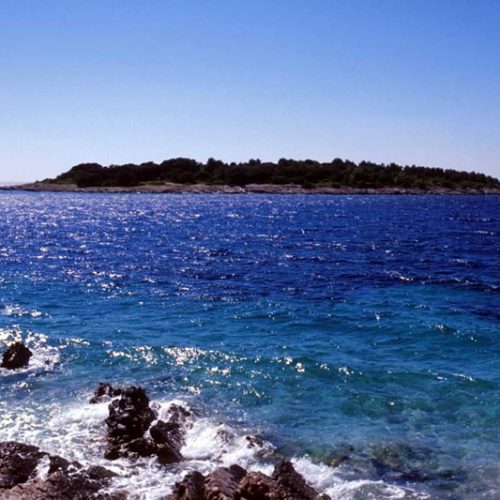 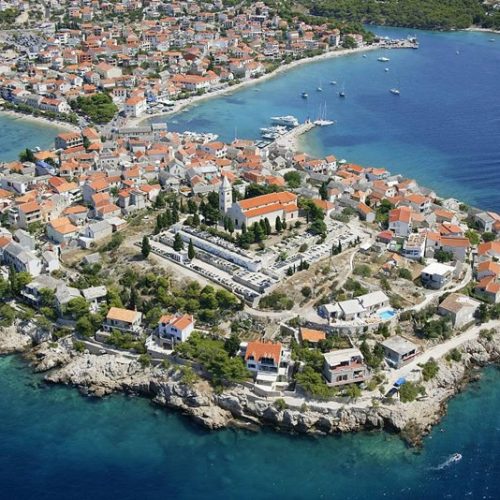 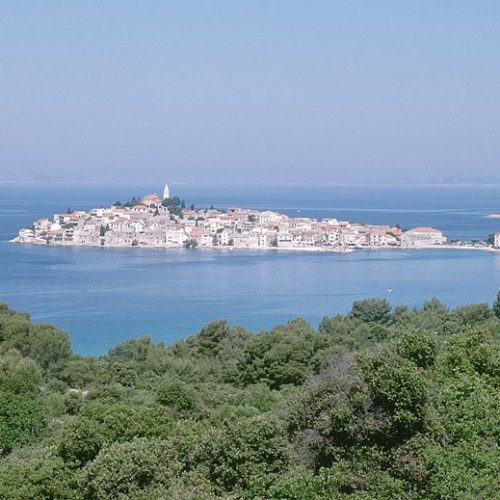 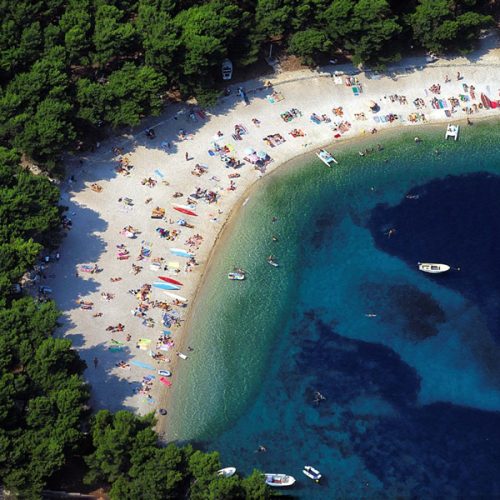 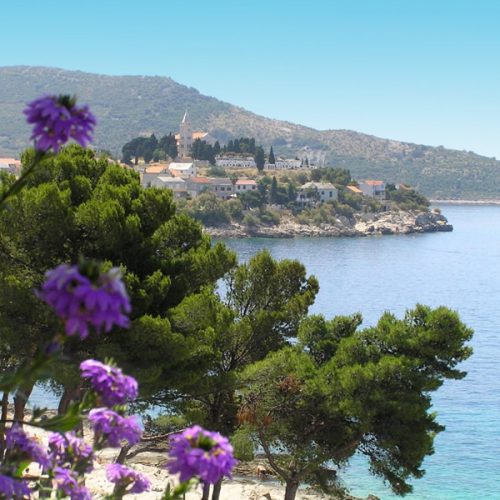 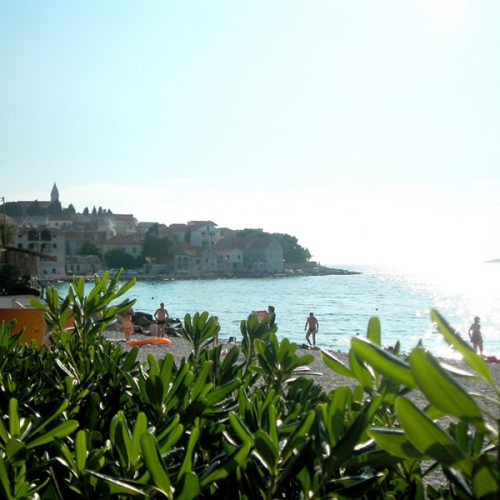